These guys recently showed off Minima at the XPO Gaming Convention. They presented visitors with 17 levels featuring two unique player characters and a plethora of varied villains and obstacles. The players must use the unique movesets of the two player characters to solve the puzzles populated by the goblins, the map, and the obstacles. This is done via a turn based play sequence in which the player makes a move followed by all other active elements. This provides a great thought based process to the game.

I played through all of the available levels and had a lot of fun. While this was an alpha build, it still felt very polished. Some levels were far easier than others, none of them presented an insurmountable problem. I do expect to see a larger variety of challenges as the game continues in development.

The art style of the game is really great too. Each character looks like a voxelated boardgame pawn. The levels are very detailed, everything looks like what it is supposed to be. The animations are all clear and fun, too. 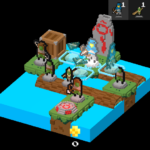 I don’t have too many complaints about this game. This is an early build after all. One of my chief complaints is that sometimes the levels don’t fit in portrait mode, but switching to landscape fixes the problem. The developers were also kind enough to provide a pinch to zoom out feature, even though it isn’t advertised just yet. The other complaint I have is that some of the early levels prevent a slight slog after overcoming the obstacles and making your way to the end portal. Sometimes, all the enemies will be at the beginning of the level and you will have to walk one space at a time for 5-6 spaces to get to the end portal. Neither of these are that big of a deal at this early stage.

One of my favorite services provided by RocketDad is their dedication to providing a running development update stream on their Twitter feeds. You can follow @MaggardJosh and @DenverSkyline to keep up to date. You can also download the early Android build of Minima over on Itch.io as well as give them a few dollars to help them as they develop this game further. I also recommend checking out the other games on Josh’s Itch.io page. There are plenty of fun games there along side the ones I have mentioned in this article.