Oklahoma State Of Gaming In Review 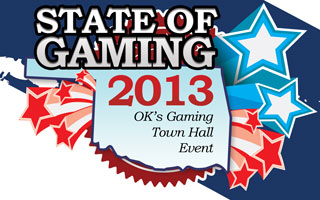 Over the weekend, OKGamers held the second of its first ever State of Gaming events. The first of these town hall events was held in Tulsa back in January and this past Saturday the event was held in OKC. Sorry for not writing about this sooner, that was my fault. Thankfully, both events were a great success and OKGamers is planning on holding them again next year at roughly the same time.

Now, the OKC one was of most interest to us at OK Game Developers as I had the chance to meet up with some great people.

First up, I met James Simpson and Luke Simkins of GoldFire Studios. These guys just recently successfully completed their Casino RPG Kickstarter. They have also created a great new Javascript sound library Howler.js that has taken the JS world by storm. These guys are doing some great things for the Oklahoma Games Industry and don’t seem to be stopping. This is shown recently hiring Art Director, Lane Brown. They also are planning a monthly game developer meet up. See you there.

Next, I met up with a pair of indie game developers who make up the team Sky Haven Studios. Run by Randy Kinsley and Eric Anderson, they are working on their first game called Sphere of Destiny. We look forward to seeing more of this.

Finally, I met an indie developer named Kevin Harris. This guy moved to Oklahoma from Wisconsin where he had helped put on a number of Game Jams. He has graciously offered his assistance in putting on a few here in Oklahoma. We may be hosting one at a convention later in the year, so keep your eyes peeled.

During the event, a lot of great questions were discussed. Some most pertinent to game developers were the need for us to find one another and network. The games industry in Oklahoma is pretty small at the moment and we need to work together to build it up. There are a lot of great people, a lot of schools putting out game development students and plenty of desire. We have all the necessary seeds, we just need to cultivate them. I look forward to meeting more of you guys at the monthly meet ups as well as next year’s State of Gaming.