A Crowdfunding Critique Of God’s Land By Cyanide Studios

I really look forward to days when I come across a new video game campaign on Kickstarter and Indiegogo. I should, it is part of my work to find and promote them. Unfortunately, there are times when the developers of the game make my work extremely difficult.

I really hate calling these guys out on this, but I think it is important to do so in the hopes that they can find something learn from this critique. So I will be taking a bit here to explain what went wrong with the IndieGogo campaign for God’s Land by Cyanide Studios. Many of these issues are ones I addressed specifically when I wrote up my tips on crowdfunding success.

Of all the problems the campaign had, nothing was quite as big as what you see at the top of this post. That missing lead image for the campaign was the biggest nail in the coffin on this campaign. I would say that it resulted in the campaign being dead on arrival. I am saying this not to be mean to the developers. I am simply stating the realities of crowdfunding. If the developers of the game care so little about their game that they don’t even bother making a lead image for the campaign page, then potential backers are going to care just as little.

This problem also goes into the rest of the campaign page. There is not a single image showing anything about the game. No mockups, no current build footage, nothing. The campaign claims that much of the work on the game has been completed and that the funds will go toward hiring an artist, but how are backers supposed to know? Without even programmer art, the game is just a cloud of ether to them. 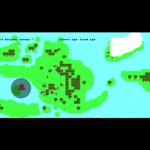 What I really don’t get about this is the fact that there are screen shots and even video available for God’s Land online. Cyanide Studios could have easily reused some of the images and video available on the Steam Greenlight page for the game.

Speaking of which, why is the link to the Steam Greenlight page not included in the campaign at all? That is a great marketing tool and a great way to show potential backers you are somewhat serious about making the game.

In fact, other than a Twitter link, there are no eternal links for potential backers to learn about God’s Land the game or Cyanide Studios the developers. I can understand that they might not have a website due to costs, but a Facebook page is almost as good. Plus it is free.

Once you actually find the Steam Greenlight page for the game, it does start to make a better argument for why it should be funded. Unfortunately, because this information was not actually on the Indiegogo campaign, it provided no help at all for IndieGogo success.

Overall, most people are not going to do the digging around that I did to find information on a game. If what they want to see and know are not found on the campaign page, they will move on and never look back.

On the bright side, development on the game still looks to be ongoing with an artist brought in to help update the Alpha level graphics while they work on it. They even have a download for the alpha build of the game, which really should have been included on the campaign.

Now that I know where to actually see the work being done on God’s Land, I really look forward to watching development of this game as it moves forward. It has a lot of promise. I just wish much of this was available when I found it on IndieGogo.