The game adds further strategy with the introduction of character blocks. There are four of them and each have their own unique ability. The Red guys burn the entire row they sit on when they are included in a match. The green ones crush the blocks below them and the blue ones wash out some of the surrounding blocks. The black ones don’t really do much except get in your way as black blocks cannot be matched out and can only be removed using the abilities of other blocks. 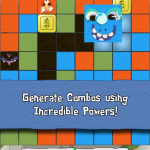 These characters are really well animated. They have various emotions that show based on their positioning on the board. If they are not around any of their own color, they will look sad. When placed with other blocks their own color, they cheer up. Finally, when they are used in a combo, the face they make when activating one of their abilities is that of pure joy.

The game also features coins that can be earned in the game. You must use the ability of one of the characters in order to collect them. These coins can then be used to purchase power-ups that will be useful for hitting a high score. This is also the game’s primary means of monetization as you can purchase more coins with real money.  However, the game is not in your face about needing to buy coins and you can probably get by pretty well without them.

Unfortunately, there are a handful of bugs in the game. I played this on an Android phone so I am not sure if these bugs are the same on the iPhone, but they were there for me. First, the game has a tendency to freeze up, thus not allowing me to make any moves. The timer and animations continue to run but I am not able to move columns or rows around. I am not entirely sure what might cause this.

The other bug is one in which the columns that fall do not fill all the gaps.  When this happens, there are empty spaces on the board and it really messes up trying to move columns and rows around. Occasionally, some blocks will only fall partly in the gaps. This one seems to be connected with trying to move columns or rows around at the same time as the blocks falling. I cannot recreate it on will, but it has happened fairly frequently.

In order to continue playing, I have to manually stop the application from the system menu. However, these bugs are not so bad that they kill any enjoyment I have with the game.

Overall, the game is a lot of fun. The graphics, sounds and music are really well done and fit the theme of the game quite well. The gameplay is unique enough to stand on its own in a flood matching puzzle games in the mobile space. It really deserves far more than the level of attention it has received. So go to the site above and download whichever version you need and get playing.