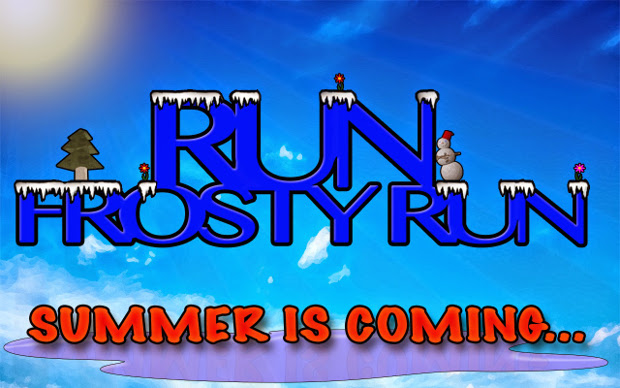 The Oklahoma heat is growing increasingly unbearable. With heat indexes 10+ degrees over the actual 95+ degree temperature, people are looking for all kinds of ways to keep cool. Many seek shade. Others seek the cool comfort of air conditioning. Still others seek a cool refreshing beverage. Yet there is one thing all these people are missing, a game about a snowman trying to escape the summer melt.

Oklahoma based Winter Stories Studio, a name already bringing on the cold, has finally released its infinite runner starring a group of snowpeople seeking shelter from the coming melt. Like many other infinite runners out there, the goal of the game is to keep running without hitting an obstacle or falling off a cliff. As you run, you collect snowflakes that are used to purchase a variety of unlockables.

When you first begin playing you play as your stereotypical snowman with stick arms and an old top hat. As you play, you can earn enough snowflakes to unlock 4 other snowpeople: a snowwoman in a yellow sundress, a snowchild, a snowgeek and a mystery snowman that I have yet to see unlocked. Each snowperson has a unique animation set and personality so you will soon find a favorite to play. 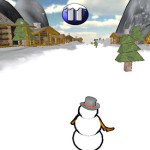 Along with unlocking snowpeople, you also collect snowflakes for the purpose of unlocking a snowman’s signature fashion piece, the hat. There are over 50 unlockable hats at this time. Most are unlocked via snowflakes earned. A few others are unlocked by performing certain actions, such as posting a highscore or following Winter Stories on Twitter. While the hats don’t provide any benefit in game, they do provide an outlet for the obsessive compulsive hoarder within all of us.

The gameplay of the game is relatively simple. This is not like Temple Run with its swiping and tilting actions. To play the game, you tap the left side of the screen to move to the left and the right side of the screen to move right. The bottom of the screen is tapped to jump over holes, fallen trees and snow covered rocks (ooh, those things are annoying). These controls get the job done and are very responsive. You will quickly become familiar with them and playing will be second nature.

The graphics of the game are also fun. The work put into making the snowpeople come alive really hits the mark. However, it is once you get to the landscape, the graphics kind of become a mixed bag. The trees are very blocky and don’t seem to match the rest of the aesthetics. They are perfectly fine and recognizable, but they just don’t really match the snowpeople in style. There are also what I assume to be penguins, but in the fast paced action of the game, they just look like black dots moving back and forth.

The rest of the effects are great though. When a snow person hits an obstacle, it explodes into a fine spray of snow dust that fills most of the screen. You really feel bad for the poor snowpeople when it happens. Additionally, the hats all look great. My favorites so far are the porkpie and the tin foil hat. 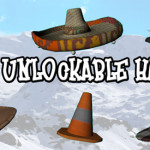 The game also features several powerups to help you rack up a massive score. There is an invincibility powerup that rolls your snowperson into a giant snowball that is impervious to everything except falling off the edge of a cliff. There is a boost that doubles your score for a short time. And finally a snowflake magnet that draws in all snowflakes no matter where on the course they are when you pass them.

As for complaints, they are somewhat minor. The game has a selfie mode where you can take a picture of the snow person in their new hat. I haven’t explored this extensively, but it seems slightly tacked on. Another problem with the game is with some of the hats that you get for performing certain actions. It is unclear in some instances just what you have to do to earn the hat. For instance, you get one hat for visiting the “more Games” section, but despite going to it, I have not unlocked the hat. Finally, the game does not have a way to indicate what hat you are wearing until you start up a run. It would be great to have an indicator somewhere in the menu to show you what hat you are wearing.

Overall, the game is a fun romp that will easily pass the time while entertaining you. Even though it doesn’t break any new ground in the endless runner genre, it pulls off the basics easily and with its own personality and sense of style. I can easily recommend picking up this game.

Now, if you are fast enough, you snag an ad-free copy of the iTunes version for free if you get these following codes right:

The clue for this one is the first two letters of the walkers used by the imperial army in the Star Wars movies: ??4AX66WFFRE

The clue to this one is the Yin to 6’s Yang, or what an old Arnold Schwarzenegger movie claims is the real mark of the beast: M4?Y3EJ4Y?W?