Back at Super! BitCon, I had the pleasure to spend some time playing The Curse of the Crescent Isle DX by Adam Mowery. Adam had created this game as an XBLIG game several years ago and it was well received by many fans.

Curse plays very similarly to Super Mario Bros. 2 for the NES. However, instead of attacking and killing enemies, you use them as tools to help you solve puzzles and advance through the game. It is a clever mechanic that doesn’t get used often enough as far as I am concerned.

Recently, Adam had taken the effort to update the game from its original NES style to a much nicer looking SNES style. He gave this updated version the DX moniker similar to many remakes from that era. He also made the choice to place the remake on Steam Greenlight. 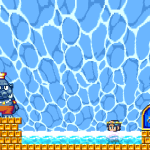 As of yesterday, Curse has been officially greenlit by the Steam community and Valve has reached out to Adam and his team about releasing Curse on Steam officially.

This is pretty big news for Adam and Oklahoma game development in general. Adam is the first Oklahoma game developer, that I am aware of, to have a game accepted by Steam for release. Adam has done a great job leading his team of artists, musicians and others in making this game something that a significant number of people want.

If you hadn’t already checked the game out, you can visit the Steam Greenlight page for Curse and checkout a few videos and follow the rest of its journey through development to release.