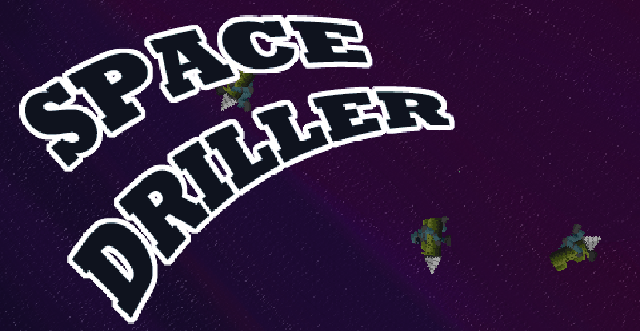 When speaking about the inspiration for the game, and specifically the music, Tyler drew a direct influence from the Metroid series.

The Metroid was our main source of inspiration, and just so happens to be my all time favorite game series. I personally took inspiration from various tracks in Metroid Prime and Super Metroid in order to create the right mood and atmosphere. For instance, the droning tone at the beginning of the main track you here during the game is an idea I got from the title theme of Super Metroid. While it’s not a beeping sound like it is in SM, but it gives the idea that maybe that while you’re under the ground in a mine, it’s still home to technology. That’s what I got from it, anyway. 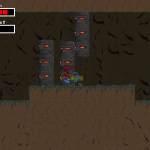 The game features three classes of enemies,  a slime mold, ghosts and tikis. Each has its one unique pattern of movements and attacking. The slime molds are fairly simple, they jump from ceiling to floor or wall to wall whenever the player passes through their line of attack. They are easily avoided and easily defeated. The tikis are totem poll style golems each with three heads stack atop one another. They activate when the player gets too close and begin leaping around the room. To defeat them, the player has to destroy all three heads, a feat that is fairly difficult to pull off. The final class of monsters, the ghosts, are the most common foe. They come in three different colors, purple, red and blue, each representing the ghosts’ defense against attack. The ghosts just float about randomly in the air and attack the player when he approaches. To kill the ghosts, the player must find the drill upgrade that corresponds to the ghost’s color.

This team had a very open design idea when it came to enemies. They would bounce ideas off one another and build on them.

Josh: The bad guys were very fun to create. But Dan played a huge role in that. Our basic concept went something like this: 1. Dan suggests a bad guy idea and basic mechanic behind. 2. I either say “that won’t work” and we come up with some type of compromise or I say “that’s awesome” and I put some programmer art in and work on implementing it while he makes the graphics for it.

Dan: The design of the monsters was basically function first, looks later.  I’d toss Josh a mechanic, such as “a dude that hops around” or “shoots in a straight line after you cross it,” and if it was possible to complete in a relatively short time I would assign a look to it.  It expanded from there, with me asking things like if we could stack the tiki-head guys.  The only monster that was developed differently was the ghost.  We knew we wanted a ghost, solely because the player character looked like a blue version of Moltar from the old Space Ghost cartoons.  Given that you were in a mining facility in space, having him fight ghosts was sort of a requirement for us regardless of whether or not it made sense.

Not all monster ideas made it to this build of the game, but there are some, particular a flying monster that dove at the player, that the developers would love to see in a future version of this game. At least one of the existing monsters in the game would see a major change in a future release. Josh expressed concern that the tiki monsters were not a big enough obstacle as the player can run right passed. He would like to make those something you would have to jump over or destroy.

Returning to the upgrades, these are the primary means of advancing in the game. The game features three upgrades to aid you in your journey. As I mentioned above, two of these upgrades are for the drill, expanding its strength and ability. There are certain walls and certain ghosts that can only be destroyed after finding the right drill upgrade. The other upgrade is the double jump. This allows the player to reach new areas and cover greater distances when jumping from platform to platform.

The game is not without its flaws though. The biggest flaw in the game is that it is too short. Just as the game starts getting interesting and I am begging for more, it ends abruptly and I am left with a whetted appetite that has gone unfed. This might not be a real flaw though. Yet, it opens a door for a more elaborate and expansive game.

One area that felt could be improved, and was expressed by at least one commenter on the Ludum Dare page, is that the checkpoints don’t stand out very well. They could be made a little easier to see. I would also make them optional, as in require a button press to activate. In at least one area, I believe after finding the double jump, there is a check point right before a wide gap in which the player must jump across. Hitting the checkpoint kinds of knocks me out of my mojo and I end up missing the jump and having to start over.

My final point of contention is with the drill’s double duty as a jet pack once you find the last drill upgrade. If you hold the down arrow and fire while jumping, it activates a jet pack mode, allowing the player to fly as long as the drill does not over heat. While the mechanic is great and very useful, I feel that it could have been better as a found upgrade with its own upgrade process. I can understand how it was used to add a differentiating factor to the final drill upgrade from the previous one. Without that, the final drill upgrade would have seemed unoriginal to many players. However, if you are not paying attention to the text that pops up when you find that upgrade, you might miss the fact that the drill is now a jet pack and are left confused at the end of the game.

Overall, Space Driller is a great game. It is available to play over at Kongregate right now. it does require the unity web player, and thus a compatible operating system, but that should not be a problem for many of you.

I have a lot more to share about these developers’ experiences with Ludum Dare, and will have that up soon.