After Delays And Power Outages, Super! Bitcon 2017 Was A Huge Hit

Rachael Messer, voice actor known for her roles in various anime and video games including Heroes of Newerth and System Shock, spoke on getting into the voice acting. She shared her experience going from a nobody on the scene to a successful self employed voice actor.

There was also a great panel in which Marc Summers and Phil Moore, known for their work on Nickelodeon’s Nick Arcade and Double Dare. They had a lively panel with stories about their careers, shows and what they have been doing since those shows were canceled. They were both great guys and a lot of fun to interact.

Finally, they had their Game Show with Geno Younger. This was a lot of fun, even if they didn’t have access to their Pünko board. The games were a lot of fun to watch and the prizes were awesome. They ended up giving away a Nintendo Switch package with Breath of the Wild, classic NES and N64 packages and tons of other great gifts and prizes. I even won a consolation prize of $30 in fun cash to Main event. I stink at throwing disks into a basket.

Moving on to the second day, The power was restored and the Sunday hours were extended to allow for extra time for guests to explore and buy games as well as for exhibitors to sell their wares. We were able to take some time to explore the floor and see some really great stuff. Let’s talk about the games. 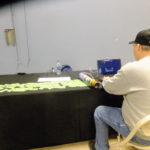 On the video game front, we had a newcomer to the Oklahoma development scene, Matt Stowe with Happy Cow Games. HCG is developing a game called Ducks in Space. It is fully playable online right now. It is a platformer in which the player guides a gun toting duck through space destroying evil space geese, collecting coins and gems, and destroying generators. Give the game a play. 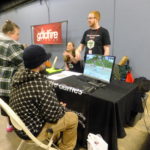 Next we had Emerald Interactive showing off their game Lil Blue Buddy. We first met Jon Sousa at a game dev meetup a few months ago and he showed off his game then. Since then, they have released the game for PC and mobile devices. 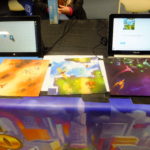 Following them, Goldfire Studios was there with not just Casino RPG, but also a new prototype they are working on for a online multiplayer strategy game. Along with the prototype for that game, they had a survey up for people attending S!BC to help choose the theme for the game. They had three themes available and we really like the da Vinci-esque style theme as it isn’t something you see too often in games. 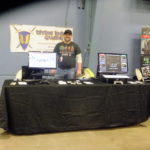 Divine Knight Gaming was also at the show. (Disclaimer, Oklahoma Game Development is owned by Divine Knight Gaming and I, E. Zachary Knight, am also the lead developer for DKG) They were showing off Manly Boy, which included several updates for the show. They also had their latest prototype for a Gauntlet inspired multiplayer game, Deadly Labyrinth. 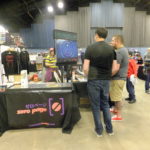 While we didn’t get the chance to speak to anyone from Zero Page Games, they had a booth set up and were showing off their up coming game Rotostellar. These guys also made a really cool collection of retro style games, Retro Game Crunch. 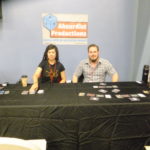 Sadly, there was only one table top game developer at the show. But it was for an awesome new competitive card game, Churrascaria, developed by Absurdist Productions. They are fleshing out the game and plan on hosting a Kickstarter for production of the game later this year. We wish them the best of luck. 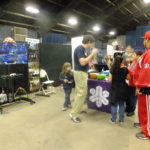 Finally, Nodecraft was there with a demo of their web and game servers available to anyone wishing to host a private server for one of their favorite games. They had demo stations set up with their Minecraft and Rocket League servers going as well as some fun goodies.

There were also quite a few artists there. I hope that I am able to give them all credit, but I likely missed a few. Each had some great artwork at the event and can be found online. In no particular order, Cute ‘n’ Deadly, Ellie Jang, The Pixelized Princess, Stacy Bridgeman, Alexandra Brodt, and Angelkeznie. 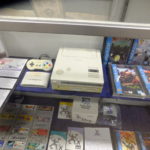 There was so much more going on. Tons of game retailers and other interesting geek cultural icons. The probable highlight of the experience was getting to see the crazy awesome Super Nintendo Playstation. I really want to play with this thing, but sadly it was behind glass. But it is great to know that this is now fully functional.